“A desperate rescue operation goes wrong in this video for ‘On Fire’ (from Black Light Discipline’s new album ‘Death by a Thousand Cuts’).” 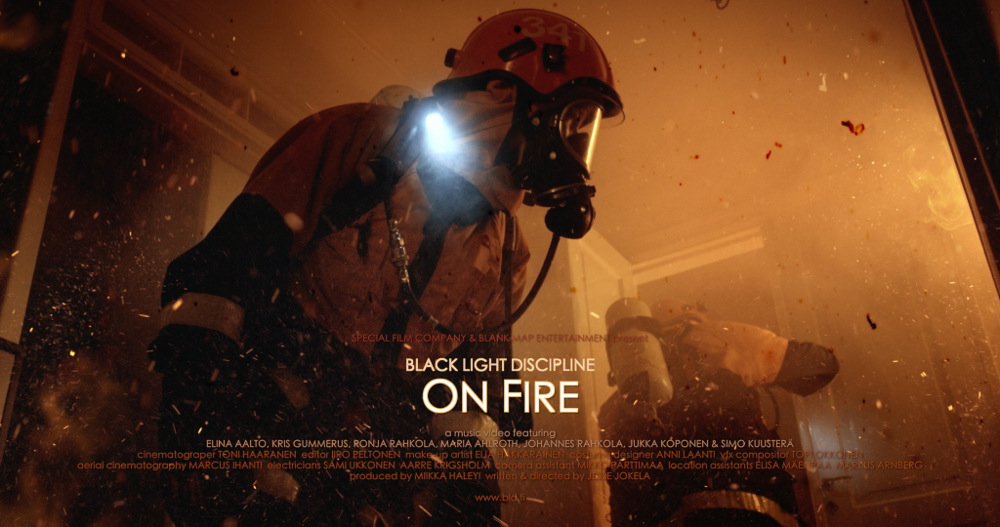 Industrial metal orchestra Black Light Discipline from Kuopio, Finland will release their third and final outing to their epic music video trilogy: ‘On Fire’ on 7th of July. ‘On Fire’ is an unapologetic, modern day action-drama about an unfortunate rescue operation to a burning house and an intertwined turning point in a couple’s life – the kind of cinematic approach you rarely see taken on metal videos.

The fiery story also sets a new visual direction for the band: this is marked by a fresh look on the band’s website, stuffed with updated promo material. ‘On Fire’ is the first single release from BLD’s latest album ”Death By A Thousand Cuts”. 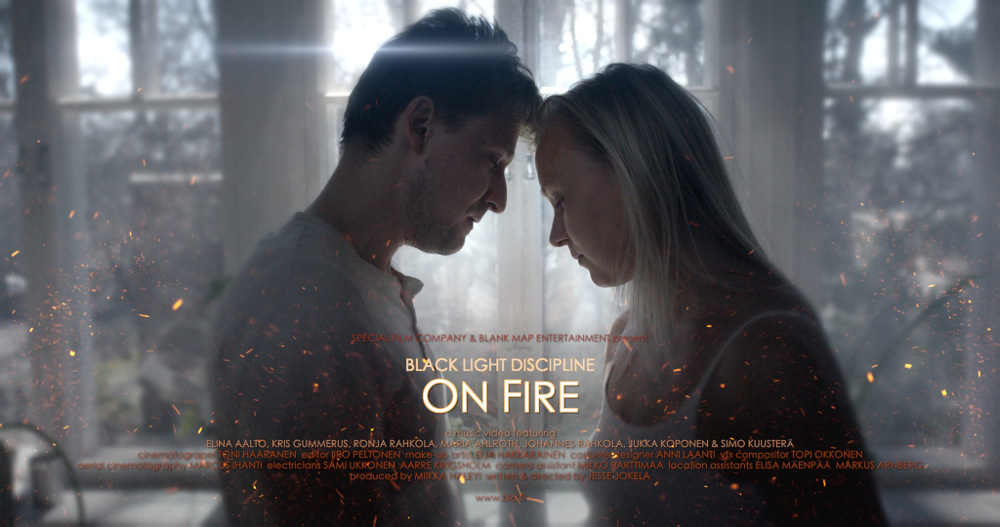 The two earlier videos in the trilogy were ‘Tides’, in which a group of sailors perish in a storm and try to pay their way past the ferryman, and ‘Walls Inside Us’, a futuristic prison break actioner spiced with parkour stunts. They have gathered more than a 100 000 views on Youtube alone, plus a good deal of playtime on MTV and local channels. ‘On Fire’ is now the third narrative video from a third consecutive album.

The big theme for all three, stemming from the band’s lyrics, is the individual’s survival in a modern world. The videos, though glimpsing BLD’s brutal live performances, are essentially short films, aiming to give the metal music video genre a little shake-up. They are shot as independent cinematic pieces, almost as if the songs were written for the stories – and not the other way around. 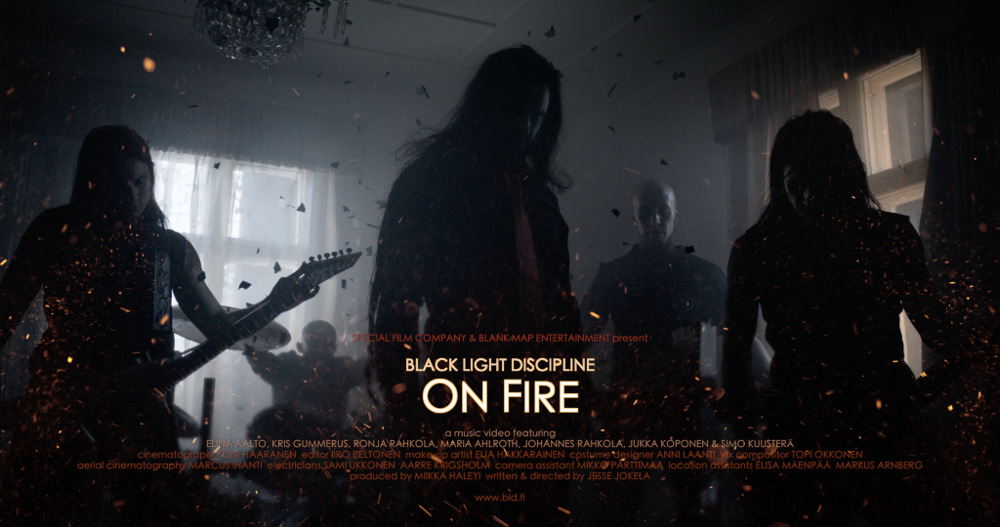 ”We really believe a story can elevate a song, and if it can do so in a way you didn’t see coming, even better. Trying to avoid the visual clichés that belong to a genre can be difficult, but as BLD doesn’t really belong in any one genre, it’s been pretty easy actually! The band combines dance beats effortlessly with headbanging metal, so I felt we need to be able to do a similar clash between the visuals and the song. Plus it’s more fun to color outside the lines.” -Jesse Jokela (director)

This is what Janne Kankkunen and Toni Valha from the band had to say on the matter:

”On the video for ‘Tides’ the crazy bastards poured freezing sea water on us in the middle of the night, so we stayed the hell away from the set of ‘Walls Inside Us’ (and it turned out great). This time, we’re back in the video for ‘On Fire’, but luckily for everyone, there’s real actors in the main roles.” 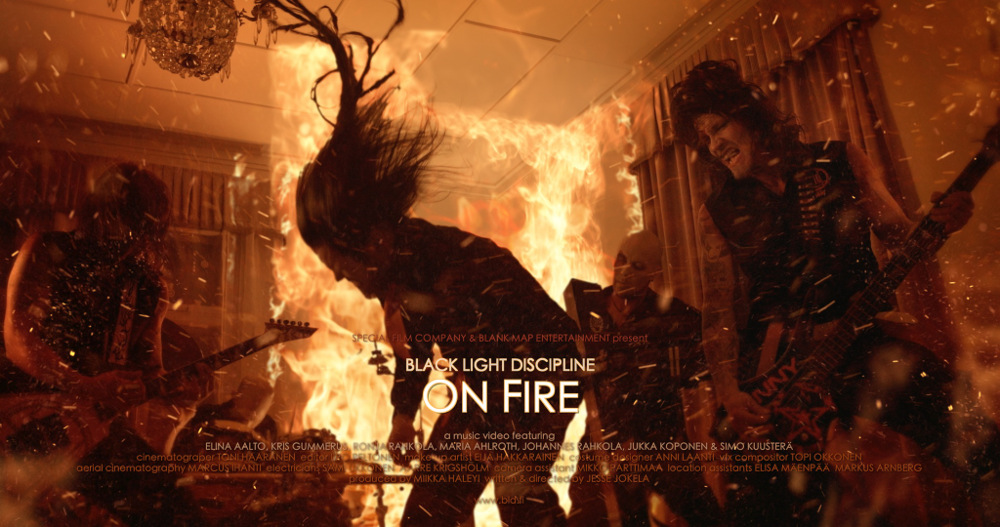 The video stars a number of Finnish actors, including Elina Aalto, Kris Gummerus, Maria Ahlroth, Ronja Rahkola and Simo Kuusterä. You can watch and share ‘On Fire’ from the band’s official youtube channel here.

Black Light Discipline works under their own label Raw Entertainment, which is the publisher of their two latest albums. You can also find their music from Spotify. For additional interviews from the band and filmmakers, please contact: bld@bld.fi 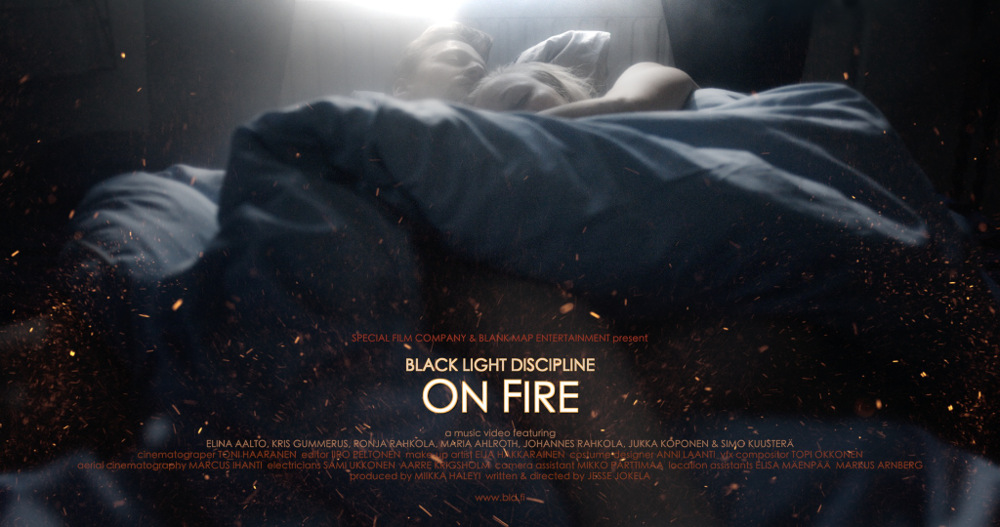